Well, what a few months this has been! After my last post re tiredness my pregnancy ran smoother although I did suffer further with tiredness and achyness. Once I got myself a bump band (from JoJo Maman Bebe) and lots of very early nights I felt better.

I made sure I looked after myself - I bought maternity clothes, mostly from Debenhams, JoJo Maman Bebe, H&M and Matalan so I felt a lot more sassy than during my first pregnancy when I mostly wore hand me downs that weren't my style and made me feel unattractive. For some reason maternity clothing costs the earth - because they can I guess - if anyone business savvy wants to set up an affordable maternity clothes shop with me I think we'd do great! That being said it's definitely worth taking some time and treating yourself mums! I looked out for sales and got most of my dresses for under £20!


One of the hardest things for me during my pregnancy was not knowing what we were having as I like to be super organised and get everything ready. Of course, I didn't mind what I had  - I just wanted a healthy baby. However, I must admit the rush of being the one to see and reveal the sex at the birth was kind of worth it (but don't tell Pete!) I had a lovely, chilled water birth. I have been studying mindfulness a lot and my friend has recently trained as a hypnobirther (I'm not sure whether this is the correct technical term - sorry Fran!) If you're thinking of completing a course on hypnobirthing I would highly recommend Fran. Check her facebook page out by following the link: https://www.facebook.com/mamagotthisfran/
She gave me some great advice and I was totally ready when it was time for Elliott to make his arrival. In fact, Pete didn't even believe I was far along enough "You're too calm!" he said - brilliant! If you want to hear more about the birth, just let me know.


Elliott Stephen John Loates arrived on 23rd August 2017, 3 days early and much earlier than expected as Harrison was a week late! As soon as Elliott arrived I was broody for the next one. I was just so ecstatically happy! I must admit that has faded a bit now. I love my boys to bits but the tiredness has kicked in so adding another bub to the mix right now probably isn't the best idea! 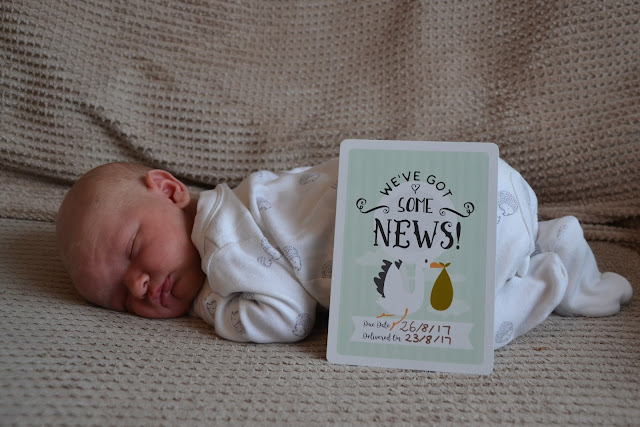 Harrison is making a super big brother. He started school in September so there has been a lot of change for him but he's coping well. Over the last few weeks his behavior had started to deteriorate but with a little TLC and by really focusing on not getting snappy and shouting at him (tiredness does horrible things) it has improved and he's back on track. 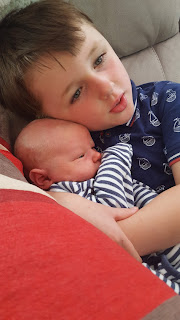 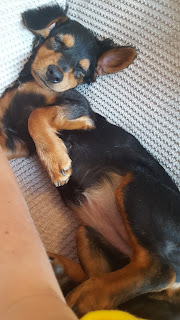 One thing I haven't mentioned yet is our other new member of the family. The cuteness competition is on! Tilly Beau Loates arrived on 22nd August (yes the day before Elliott) Tilly is a rescue dog we adopted from a pound in Cyprus so she wasn't allowed to travel until she was 4 months old. I had a niggling feeling that she would end up arriving at the same time as the baby (didn't realise it would be that close) but she was too cute to say no and I knew I could cope. We are extremely lucky because she is the sopiest most loving little pup you ever met - such a lap dog! We all love her very much! She's just been spayed so she's in the cone of shame at the moment. Even so, she's loving all the extra cuddles.


We've already had our first family holiday; we went to Portugal over October half term. I LOVED it there. We stayed at the Paraiso De Albufeira where we had a room with a little kitchen - perfect for making up bottles. They had good food, great facilities and fantastic entertainment, especially for the kids. Travelling with the kids was fine; Harrison played on the kindle and the baby slept; I held him in the baby carrier to save my arms. Mum and Dad came too. It was lovely to spend time with them and have help with the kids. We had a well needed break and I can't wait to go back there again (next year, fingers crossed).


That's all for now folks - I'm off to have a bath with a relaxing Lush bath bomb as both kids are in bed and we've been fed- go me! I hope you've enjoyed this update. If you have any questions or would like me to talk in more detail about anything please comment below :)